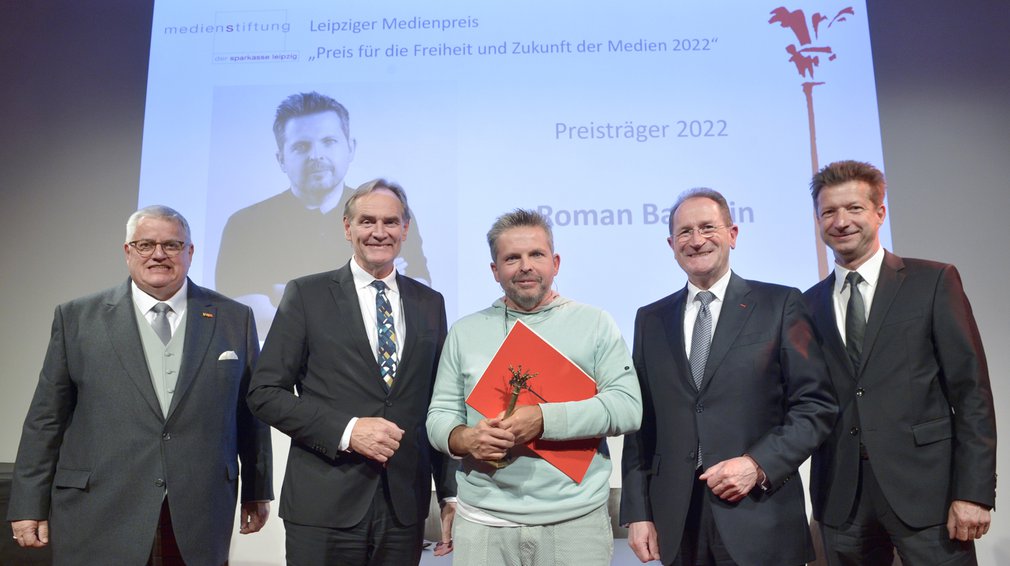 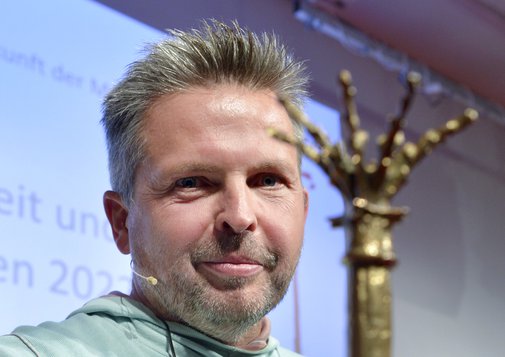 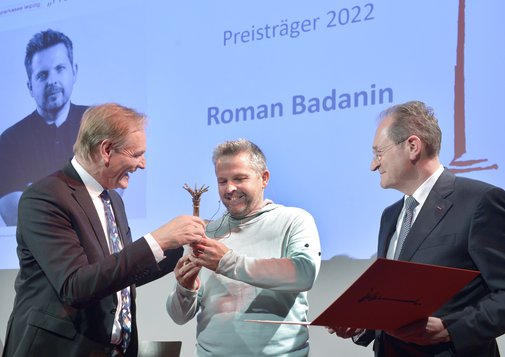 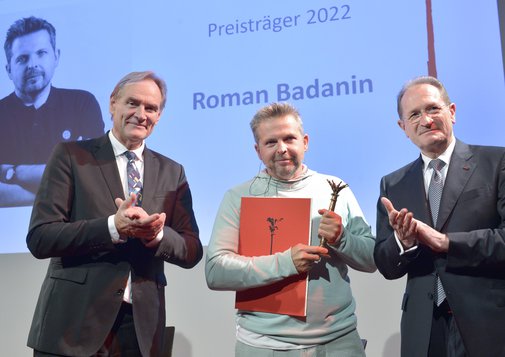 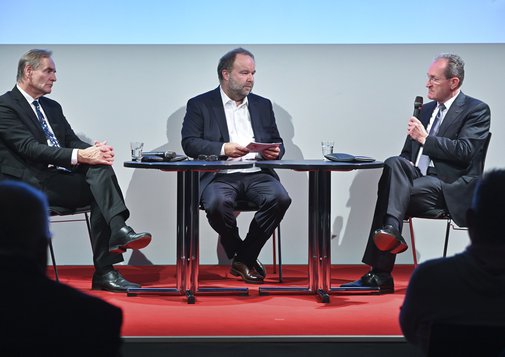 Russian investigative journalist honoured with the Prize for the Freedom and Future of the Media 2022.

Leipzig, 7 October 2022. This evening in Leipzig, the Russian investigative journalist Roman Badanin was awarded the Media Foundation of Sparkasse Leipzig's Prize for the Freedom and Future. The award honours media professionals and institutions who have committed themselves to freedom of the press and freedom of expression in their work and who, in doing so, also accept repression, often including attacks on life and limb. The award is endowed with 10,000 euros and was presented at the seat of the Foundation, Media Campus Villa Ida.

Laureate Roman Badanin thanked the jury for the award: "I am honoured to receive this important award. I believe that in this way the German society rewards all independent journalists in Russia for their difficult and sometimes very dangerous work. Let's hope that our work will help stop the insane dictator who seized power in my country and stop the bloodshed in Ukraine."

Burkhard Jung, Chairman of the Foundation Council and Leipzigs Lord Mayer, honoured Roman Badanin as "a beacon of independent journalism in Russia. Media professionals like him gave us early warning of what a brainchild Russian President Putin is - and many paid dearly for it. In the future, we will have to listen much earlier and more carefully when such voices are heard."

In view of the current political situation in Russia, Dr Harald Langenfeld, Chairman of the Boards of the Foundation and of Sparkasse Leipzig explained that anyone who rises up against the Putin regime deserves the full solidarity of Western societies. "We are currently seeing how people are voting with their feet and leaving Russia in droves or protesting with smaller or larger actions against the war in Ukraine. We must support and strengthen such reactions from civil society wherever possible."

"With the award, the jury sent a clear signal that the free world is not willing to accept the liquidation of freedom of the press and freedom of expression by Putin's autocratic regime. Where there is no free press, the lie becomes the officially decreed truth," explained Stephan Seeger, Managing Director of Media Foundation, when the award winner was announced in July of this year.

Note: The award ceremony will be broadcasted live on 7 October from 5 p.m. on the homepage of the Foundation www.leipziger-medienstiftung.de and on YouTube at https://www.youtube.com/watch?v=8X--rANdrPI. In addition to the presentation of the prize, you can also follow a panel discussion with Roman Badanin and former media prizewinners Renate Flottau and Arndt Ginzel, moderated by Andreas Platthaus (Frankfurter Allgemeine Zeitung).

Born in Kurgan (Russia) in 1970, Roman Sergeyevych Badanin got to know the journalistic work in relative freedom from 1997 on at the independent newspaper Izvestia, after which Badanin worked in leading positions in Russian media such as Gazeta.ru as well as Western media in Russia such as Forbes.ru. Between 2014 and 2017, he encountered the increasing restrictions on media freedom as editor-in-chief of the news agency RBK and the government-critical TV channel Dozhd. In 2018, Roman Badanin, who studied at Stanford University as a fellow of John S. Knight Journalism Fellowship programme from 2017, founded the investigative portal Proekt (Project), which reports, among other things, on the Russian paramilitary organization "Wagner" and on the economic activities and corruption of Russian political elites.

From 2019, Proekt was monitored by government agencies and in 2021 it was the first independent news portal to be included in the list of "undesirable organizations". Putin's regime declared Badanin and other members of the editorial board "foreign agents". Their homes were searched and heavy fines and imprisonment were threatened if Proekt continued. Badanin - just on a trip abroad - decided not to return to Russia. Proekt continued to be operated from abroad, while Roman Badanin founded the investigative platform Agentstvo (The Agency) in autumn 2021. Badanin currently works as a Senior JSK Fellow at Stanford University.

Every year since 2001, Media Foundation of Sparkasse Leipzig has honoured journalists, publishers and institutions who are committed to the freedom and future of the media with great personal commitment with the Prize for the Freedom and Future of the Media. The award is also intended to keep alive the memory of the Peaceful Revolution in Leipzig on 9 October 1989: At that time, the East German demonstrators called for "a free press for a free country".

Englisches Originalzitat von Roman Badanin: I am honored to receive this important award. I believe that in this way the German society rewards all independent journalists in Russia for their difficult and sometimes very dangerous work. Let's hope that our work will help stop the insane dictator who seized power in my country and stop the bloodshed in Ukraine.