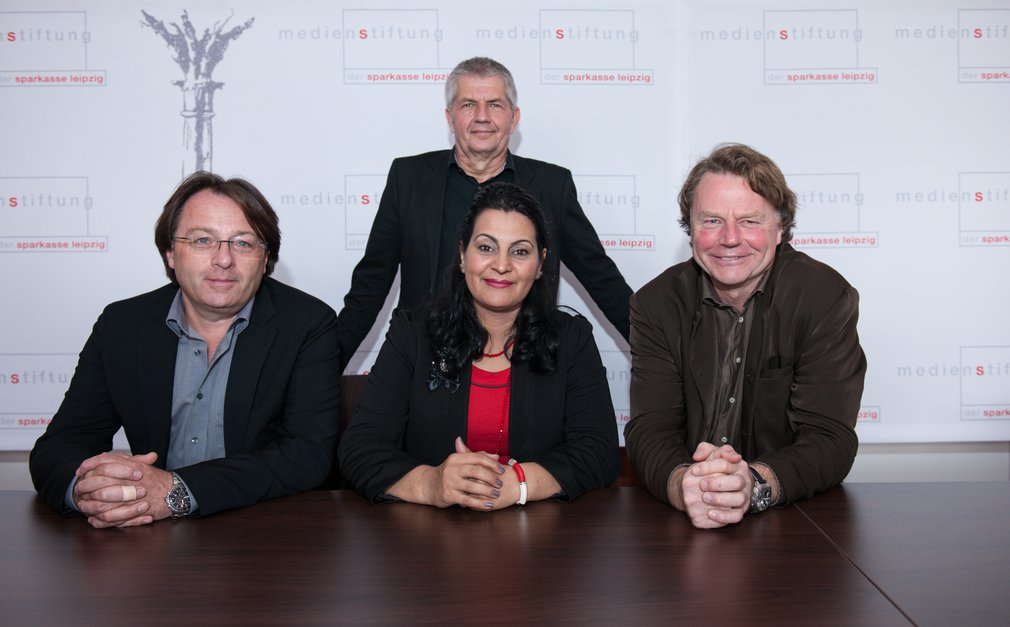 Leipzig, 24 July, 2014. Four actors of the "Peaceful Revolution" of 1989 in East Germany and an Afghan journalist will be honoured with the Leipzig "Prize for the Freedom and Future of the Media" 2014. Aram Radomski, Siegbert Schefke, Roland Jahn and Christoph Wonneberger are honoured for their struggle for freedom of the press in former East Germany. Farida Nekzad will be awarded the prize for her commitment for a pluralistic society in Afghanistan. With this award, the Media Foundation of Sparkasse Leipzig public savings bank honours five individuals who have committed their work for an independent reporting in different ways but always under great personal commitment and with danger to their personal health. The award is endowed with 30,000 Euros and will be handed over personally to the laureates in Leipzig on 8 October.

"Farida Nekzad fights a similar struggle for the freedom of the press in today’s Afghanistan. Since many years, but especially within the last months and in the advance of the presidential elections, she gives a voice to the Afghan public and especially the Afghan women with her reporting and her institutional work e.g. by founding an independent news agency. She puts up with attacks which even culminated in death threads, although she was offered to leave her home country several times", Seeger added.

"The 25th anniversary of the 'Peaceful Revolution' of 1989, which - starting from Leipzig - led to significant changes not only in Germany but in whole Europe, prompted the jury to honour four actors of those events as a group with the Leipzig Media Award vicariously for the thousands of protestors. The demand for an independent reporting, for free media and a pluralistic society were key demands of the civil rights activists and protestors during the Leipzig Monday Demonstrations. Aram Radomski, Siegbert Schefke, Roland Jahn and Christoph Wonneberger were amongst those who formulated these demands and provided them publicity by their courage and intelligence. Thereby, they contributed to an opposing public in former East Germany which undermined the monopoly of opinion of the ruling communist party SED", said Stephan Seeger, Managing Director of the Foundation.

Farida Nekzad is one of the most renowned journalists in Afghanistan. After returning to her home country from exile in Pakistan and a short course study in India in 2002, she has been news director and editor in chief of the largest independent Afghan news agency "Pajhwok News" between 2004 and 2009. After that, she has been editor in chief of "Wakht News Agency", which is especially dedicated to the reporting about women and women's rights in Afghanistan. Until June 2014, she has been an elected member and director of the "Media Commission" within the Afghan "Independent Election Commission", which should ensure a balanced media coverage of the parties standing for election in the context of the Afghan elections in 2014.

Farida Nekzad trained young journalists in Afghanistan and is also active as an honorary board member of the transnational organisation "South Asian Women in Media". Her commitment and journalistic activities made her a respected voice in the fight for women's rights and to freedom of the press - and also the target of multiple death threats, a bomb attack and an attempted kidnapping in the past. Currently, Farida Nekzad lives in Germany as a guest of the "Hamburg Foundation for Politically Persecuted People" (www.hamburger-stiftung.de).

Aram Radomski, Siegbert Schefke, Roland Jahn and Christoph Wonneberger are essential actors of the "Peaceful Revolution" of 1989 in former East Germany as well as of the oppositional movement in advance of the events. Christoph Wonneberger, who has been a protestant pastor in Dresden (1977 to 1984) and Leipzig (since 1985), coordinated the Monday's peace prayers in Leipzig's St. Nicholas Church since 1986 and participated in the work of oppositional movements from within the church. In 1989, he maintained a "Demo-Telefon" ("protest phone"), where western journalists could inform themselves about the events in Leipzig. On the evening of 9 October 1989, Wonneberger gave an interview to ARD "tagesthemen" (West German news broadcast) and reported about the peaceful demonstration in Leipzig with 70,000 protestors.

Roland Jahn was expelled from the university because of his criticism of the expatriation of the famous East German songwriter Wolf Biermann in 1977. He was a co-founder of the "Friedenskreis Jena" ("peace circle Jena") and was politically persecuted because of his commitment for freedom of expression. In 1982, he was remanded in custody, sentenced and prematurely released because of protests in West Germany. In June 1983, he was then thrown out of East Germany against his own will. Based from West Berlin, he supported the East German opposition financially and logistically e.g. by procuring printing machines or video cameras. As a journalist, he produced numerous contributions for ARD broadcasting (First German Television) about the East German opposition, violation of human rights and environmental pollution and thus essentially contributed to the formation of an opposing public. Since March 2011, Roland Jahn is Bundesbeauftragter of the Stasi-Unterlagen-Behörde (Federal Commissioner for the Stasi Records).

Siegbert Schefke was one of the founders of the Berlin based "Umweltbibliothek" ("environment library") where he met Aram Radomski. Together they worked as freelancers for different West German media and particularly documented the decline of historic city centres, the destruction of the environment in East Germany and the burgeoning oppositional movement. From the tower of Leipzig's Reformed Church near the city centre, they recorded the Monday Demonstration of 9 October with a camera provided by Roland Jahn. West German media published their significant material on 10 October where it was spread into the world and especially reflected back into the GDR. Until today, Schefke works as a TV-editor at Mitteldeutscher Rundfunk (Central German Broadcasting). Radomski is CEO of Berlintapete GmbH (Berlin Wallpaper Ltd.).

Since 2001, the Media Foundation of Sparkasse Leipzig awards its "Prize for the Freedom and Future of the Media" to journalists, publishers and institutions who show a strong personal commitment to the freedom and future of the media. The prize is also intended to keep alive the memory of the Peaceful Revolution of 9 October 1989 in Leipzig, when protesters demanded "a free press for a free country."