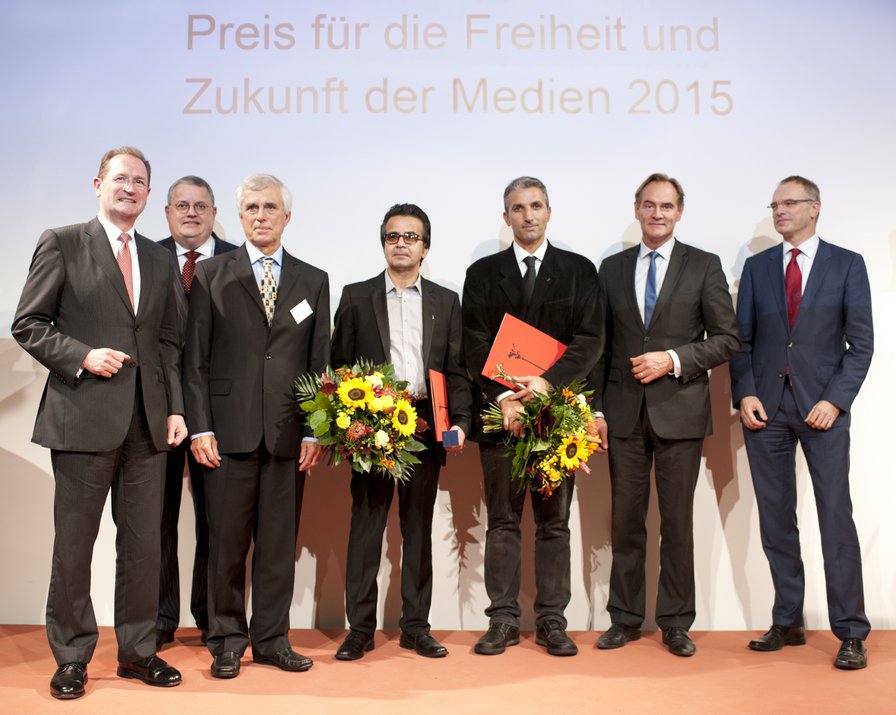 "The era of state repression and isolation is ending"

Leipzig, 8 October, 2015. The Sparkasse Media Foundation honored German-Turkish journalist Nedim Şener and Iranian filmmaker Jafar Panahi with the 2015 Prize for the Freedom and Future of the Media at an award ceremony on the evening of October 8th. The award goes to people and institutions who dedicate themselves with courage and exceptional commitment to establishing and protecting freedom of the press and is bestowed along with a total of 30,000 euros.

"This year, the situation of journalists and independent media has further deteriorated in many parts of the world", explained Dr. Harald Langenfeld, chairman of Sparkasse Leipzig and of the Media Foundation at the award ceremony. He reminded his audience of the attack against the French satirical magazine Charlie Hebdo and against journalists in crisis zones such as the Ukraine, Syria, and Iraq; but also warned: "Week after week, we experience anti-Islam and xenophobic protests in Germany that seem to express a fundamental disapproval of diversity of opinion and freedom of the press. (…) Each individual case may be different, but these examples clearly show that freedom of the press and freedom of expression need advocates at all times and in all places."

Burkhard Jung, Lord Mayor of Leipzig and Chairman of the Foundation Council of the Media Foundation, honored the laureates: "Jafar Panahi, the Iranian filmmaker, sees his work as a contribution to liberalizing his country. Despite censorship and publication bans, he always finds a way of showing us a different, a contradictory Iran. For a global public – and his is nothing short of this - he has become a bearer of hope for change in his home country." Jung called Nedim Şener one of the most renowned journalists in Turkey, "whose books, research, and features have always revealed the delicately woven web between state, intelligence services, and legal authorities." Addressing the laureates, Jung said: "You need great courage and a firm resolution to seek the truth to do your job."

Nedim Şener, persecuted by public authorities in large part for his research on the Hrant Dink murder case, came in person to accept the award: "For seven years, I have been trying to lay bare the truth behind this case. But I would never have thought how difficult it would be to speak the truth, and how high the price would be for doing so." According to Şener, there are structural threats to freedom of the press in his home country: "Being an impartial journalist in Turkey means being insulted, experiencing violence, and losing your job."

Jafar Panahi, represented by his brother Yousef Panahi when Iran denied him permission to leave the country, explained: "The fact that Nedim and I keep on working despite occupational bans from our governments shows that the era of state repression and isolation is ending." In the world of internet and satellite communication it is "childish that governments try to practice censorship by means of informational quarantine and restrictions", he added. In his acceptance speech, Panahi said that it is his "idealistic belief that those in power will realize that all their censorship and punishment are in vain."

Stephan Seeger, Managing Director of the Media Foundation and Director of the Foundations of Sparkasse Leipzig, pointed out at the award ceremony’s press conference that, in the face of the current debate surrounding refugees and the partly violent demonstrations in connection with it, the freedoms of Europe require protection: "Not only in the Hindu Kush, but also in the Taunus, the Erzgebirge, or the Rhoen mountains. We must stand up for the freedom of journalists to do their work without being threatened. We must fight for the right to openly express and justify opinions. We must listen to arguments and weigh them carefully", Seeger added. Remembering the fall of 1989, he warned: "With the experiences from our history, we should exactly know what it means when one is forced to leave one’s home. The Peaceful Revolution has many heirs, and not all of them manage to manage that heritage carefully."

In his Leipzig Speech on Media and Press Freedom at the award ceremony, Henrik Kaufholz, Danish journalist, co-founder and manager of the SCOOP project as well as chairman of the European Center for Press and Media Freedom (ECPMF), explained: "The media are under pressure; freedom of the press, freedom of opinion, and the freedom to assemble are acutely threatened – and with them, the basis of a free and open society." In Western Europe, we hardly perceive this threat, he added: "We seem to be in on everything. We have the world in our pockets in the form of a smartphone. We are online 24/7. But it is still getting harder each day for us, in this well-informed world, to stick to the essentials. And human rights are essential!" He named various recent examples of journalists who have been threatened or hindered in their work. Many of them react by practicing self-censorship. The European Center for Freedom of the Press and Media, founded this year in Leipzig, will document, analyze, and provide a public platform for these cases and support journalists under threat: "We will do everything in our power to reduce the pressure on freedom of the press – no matter where in the world!" Kaufholz added.

About the 2015 Media Award Laureates:

Jafar Panahi was born on 11 July, 1960 in Mianeh, Iran. He studied Directing at the Iran Broadcasting University in Tehran, where he was able to familiarize himself with international film. Afterward, he began his professional career completing television projects and working as an assistant director. His first film, The White Balloon, was awarded the Golden Camera at the Cannes International Film Festival in 1995. In 1997, he was awarded the Golden Leopard at the Locarno International Film Festival for his film The Mirror. His film The Circle (2000), which was awarded the Golden Lion at the Venice Film Festival, was banned in his home country. The same is true of most of his subsequent work, including Offside (2006, awarded the Silver Bear at Berlinale), This Is Not a Film (2011), Closed Curtain (2013, Silver Bear at Berlinale), and Taxi Tehran (2014, Golden Bear at 2015 Berlinale). Panahi received additional awards, including the Carrosse d’Or at the 2011 Cannes International Film Festival and the European Parliament’s 2012 Sakharov Prize for Freedom of Thought. After Iran’s presidential elections in 2009, Panahi openly supported the opposing Iranian Green Movement. On March 1, 2010 he was arrested together with his wife and daughter by Iranian police, and was initially jailed for three months without charge. In December 2010, he was sentenced to six years in prison for "propaganda against the system" and a 20-year ban was placed on his work. Despite all this, he frequently manages to publish new films. His latest work, Taxi Tehran, was awarded the Golden Bear at the 2015 Berlinale Film Festival.

Nedim Şener was born in 1966 in Germany. In 1990, he completed his studies in economics at Istanbul University. Since 1991 he has worked for various Turkish newspapers: He began at Ilk Haber, worked from 1992 to 1994 for Dünya, moved to Milliyet from 1994 to 2011, and has been with Posta since 2011. He has published several books dealing with topics that include corruption, fraud, organized crime, tax evasion, the funding of terrorist organizations, and intelligence agencies. In 2009, he published his research on the assassination of Hrant Dink, the editor of the Armenian-Turkish language weekly who was shot dead in broad daylight in 2007. Şener accused the Turkish authorities, and especially the intelligence agency, of not having prevented the killing, and it was suspected that the police had provided the alleged murderer with an incentive to commit the crime. As a result of his actions, the journalist was charged with the illegal dissemination of confidential information, but was acquitted in court. In 2011, Şener and ten other people were arrested and accused of working in the media branch of Ergenekon, an underground organization which was said to have planned a coup against the Erdogan government. He remained in prison until March 2012, for a total of 375 days. He is still regarded as a terrorist in Turkey.