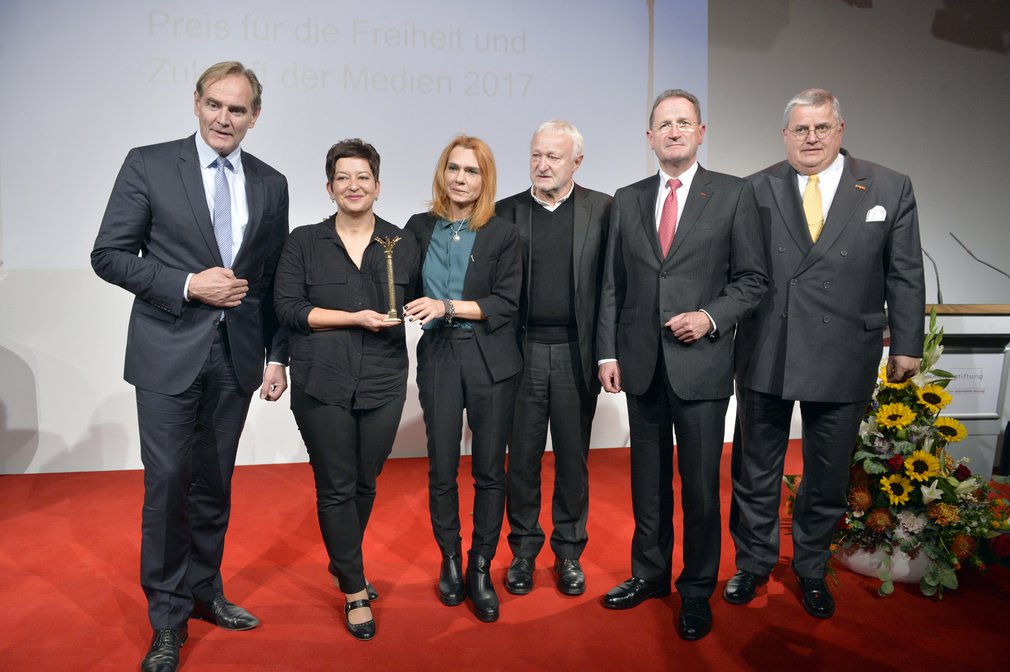 Leipzig, 6 October 2017. On the evening of 6 October 2017, the Media Foundation of Sparkasse Leipzig honoured Turkish author and journalist Asli Erdoğan and the German-Turkish journalist Deniz Yücel with its Prize for the Freedom and Future of the Media. The prize is awarded annually to journalists, media professionals and institutions which stand up for press freedom with exceptional courage and commitment. It is endowed with 30,000 euros. Asli Erdoğan accepted the prize in person, while Deniz Yücel was unable to attend the award ceremony due to his imprisonment in Turkey. His sister Ilkay Yücel accepted the prize on his behalf.

“From here we are sending a strong signal of solidarity with Deniz Yücel and all other journalists who are currently suffering under state repression in Turkey and elsewhere,” explained Dr. Harald Langenfeld, Chairman of Sparkasse Leipzig and the Media Foundation of Sparkasse Leipzig, during the award ceremony. He highlighted the severe threat to the freedom of the press in Turkey: “And this in a country with which we share deep bonds, both in our hearts and emotionally, whose past and culture overlap and have much in common with our own, in which many people place their hope for Europe and the free exchange of ideas and opinions,” Langenfeld continued.

The Lord Mayor of Leipzig, Burkhard Jung, who is Chairman of the Council of the Media Foundation, also underlined the growing concern in view of current developments in Turkey: “The prisons are fuller than ever before. If journalists are released – for reasons one can hardly rationally comprehend – then they face the prospect of being banned from continuing their profession. The freedom of the press and the media in Turkey is not just in extreme jeopardy, it has virtually been suspended.” He explained that the awarding of the prize was an instrument for the protection of independent journalists: “We want to keep the scandal alive; the scandal that a German-Turkish journalist has been in solitary confinement for nearly a year, simply for doing his job.” He also praised award winner Asli Erdoğan for demonstrating “courage to tell the truth” as a writer and journalist. Addressing her, Jung stated: “You are proof of the fact that free speech is not some cultural artefact smuggled in from the West. It is a planetary, fundamental right of free people, regardless of culture, religion or financial means.”

Stephan Seeger, Managing Director of the Board of the Media Foundation and Director of the Foundations of Sparkasse Leipzig, pointed out that, after Ahmed Altan (2009), Nedim Şener (2015) and Can Dündar and Erdem Gül (2016), the prize jury had once again selected award winners with strong links to Turkey. “We are monitoring the situation in Turkey closely. President Recep Tayyip Erdoğan and his government cannot escape the calls for a return to freedom of the press and for the release of journalists detained arbitrarily, nor can they avoid their responsibility for their political actions, for which they will one day be held accountable,” remarked Seeger.

Media Prize laureate Asli Erdoğan expressed her gratitude for the solidarity shown to her: “In prison, the support I received from Europe is what allowed me to remain strong.” When asked during the award ceremony press conference about the political situation in Turkey, she explained: “I have stopped seeking logic behind the conduct of the Turkish state.” She added that Europe needed to make it impossible for Turkey to pretend as if it were a democratic country: “My expectation of Europe is that it must defend the values that were developed here – democracy, freedom of speech, freedom of the press – against all forms of repression and also for itself,” Erdoğan told journalists.

Deniz Yücel’s sister Ilkay presented the words of thanks which Yücel wrote on 22 September 2017, after 221 days’ imprisonment in Turkey, on learning that he would be awarded the Prize for the Freedom and Future of the Media: “No matter how long this will continue, and no matter what figments of its imagination the prosecutor’s office will at some point write down in what it dares to call my list of ‘charges’ – I know why I am here: not only because I did my job as a journalist. But because, I might add, I did my job rather well.” He rated his “imprisonment as an award, albeit one I would rather have turned down.” He revealed that the Leipzig Prize had been an important symbol for him in prison: “Of course, I wish to thank you wholeheartedly for your contribution to me not being forgotten in this symphony of steel, concrete and wire.”

During the Leipzig Speech on the Freedom of Media and the Press, held during the award ceremony, Werner Schulz, who was a member of the German Bundestag from 1990 until 2005 and Member of the European Parliament from 2009 until 2014, stressed the value of freedom of expression.