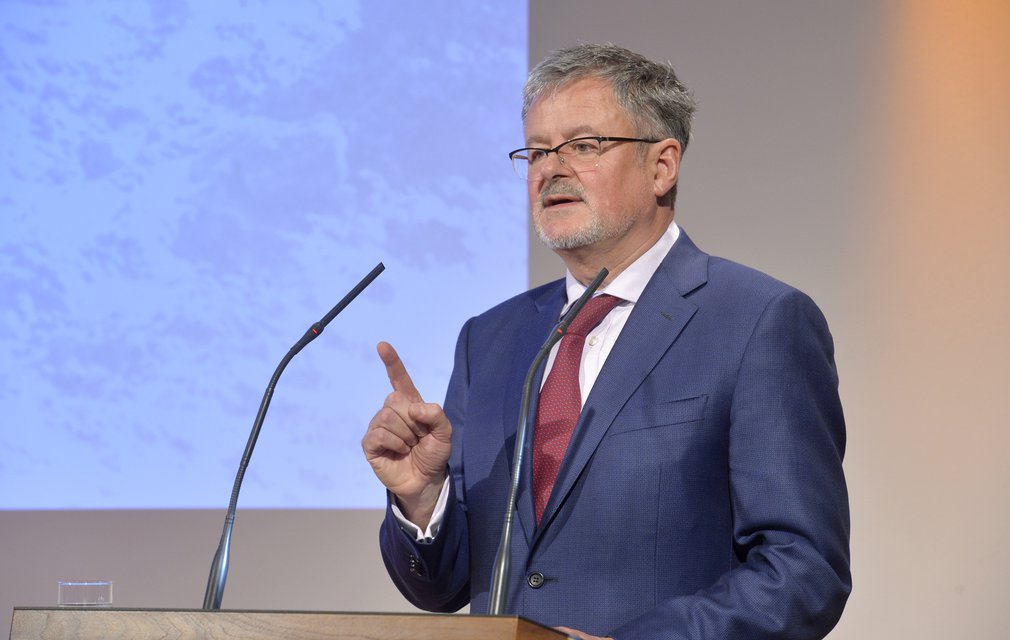 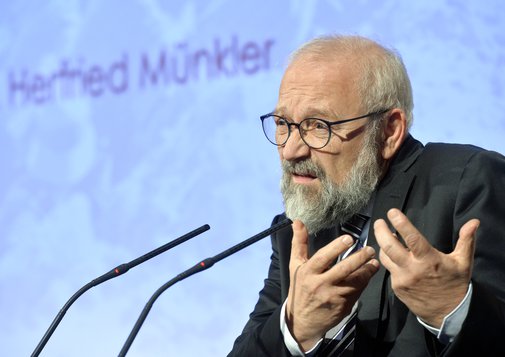 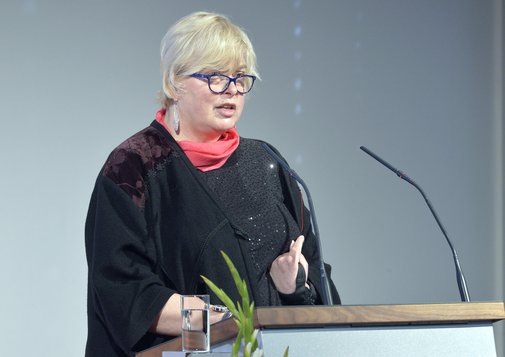 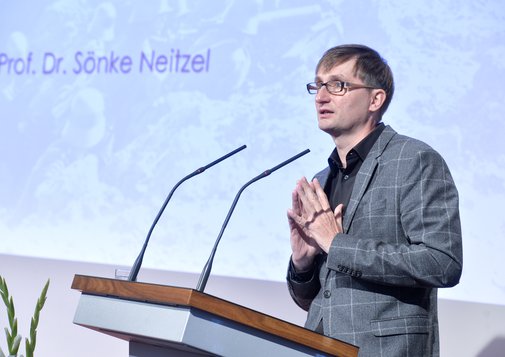 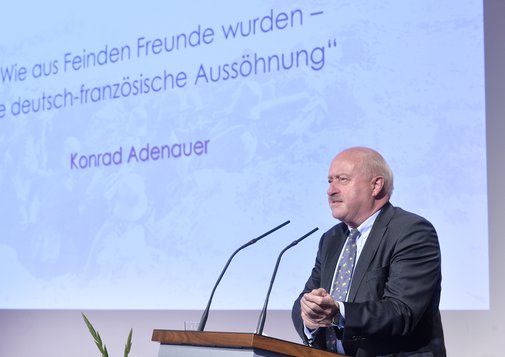 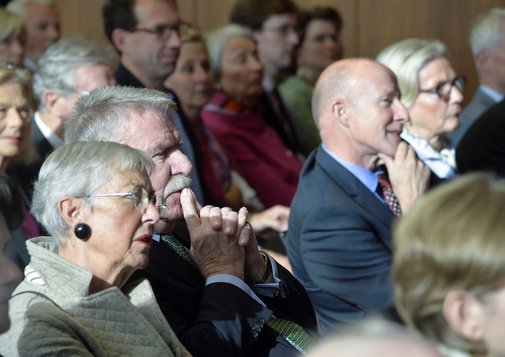 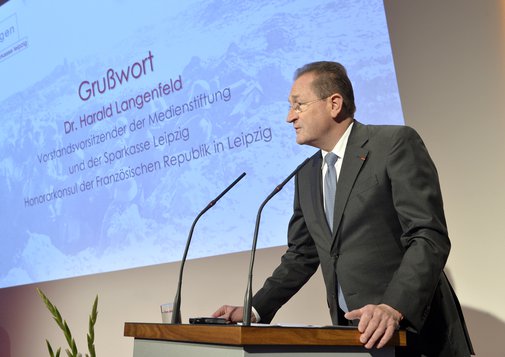 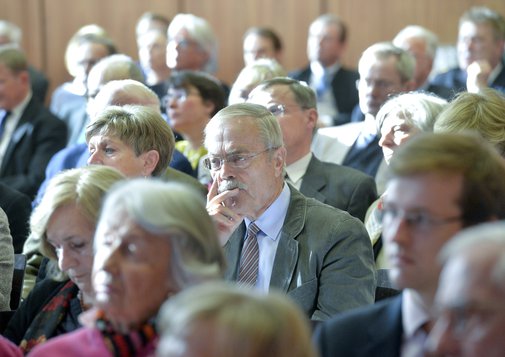 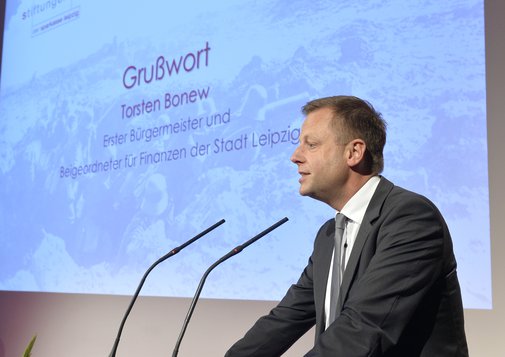 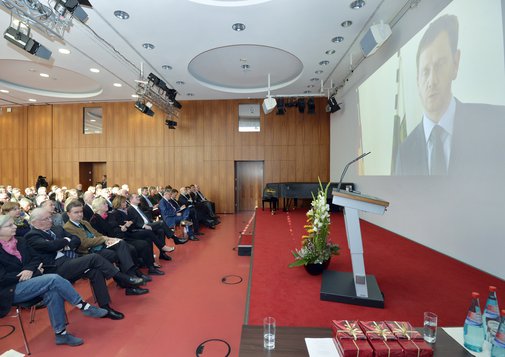 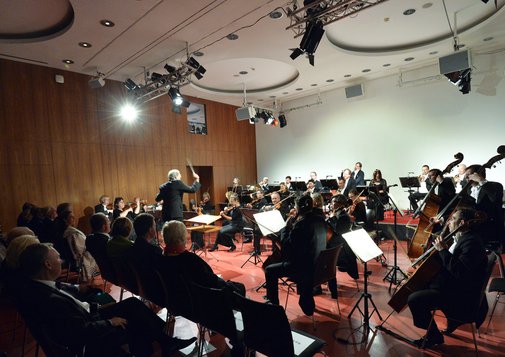 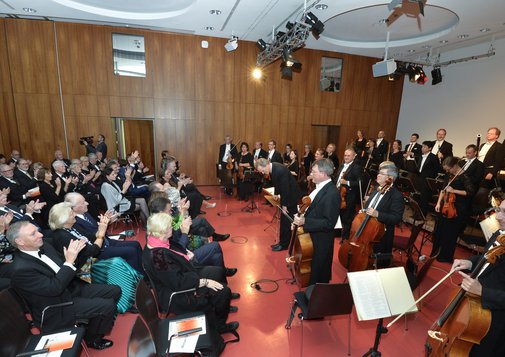 Leipzig, 20 October 2018. A symposium on the occasion of the 100th anniversary of the end of World War I was held today, Saturday, to mark the continuation of the "Schicksalsgemeinschaft" event organised by the Foundations of Sparkasse Leipzig. The aim was to question European history in lectures and a panel discussion together with the historians Professor Sir Christopher Clark, Professor Herfried Münkler and Professor Sönke Neitzel as well as the contemporary witnesses Walburga Countess Douglas and Konrad Adenauer about information about the present and future of the European idea.

"After 50 years of Europeanization, we may now find ourselves in a final phase of nation states that can be as difficult and crisis-ridden as their rise over 100 years ago," said Sir Christopher Clark, Regius Professor of History at the University of Cambridge. This is also due to the fact that there is currently only a little developed awareness of a common European history. "In many countries, national history narratives are much more present," said Clark during the panel discussion moderated by Andreas Platthaus (Frankfurter Allgemeine Zeitung). In his keynote speech for the symposium Clark said: "Whoever deals with history can recognize dangerous situations in time or even escape them".

Sönke Neitzel, University of Potsdam, argued similarly in his lecture "World War II in European memory": For many countries after the end of World War II it was a matter of finding a "master narrative" of history that "does not hurt but helps to alleviate pain". According to Neitzel, the various master narratives have a "social sense" for the nation-states and for finding an identity - he therefore called for a stronger understanding of the logic of other historiographies: "We must dare to engage in a more differentiated discourse and dare to look at our history in grey tones more often.

Herfried Münkler, Humboldt University in Berlin, explained how recent political developments elude the binary logic of the "Westphalian order" after the end of the 30-Year War: More and more often there would no longer be the polarity of war or peace, of combatant or non-combatant, of interstate conflict or civil war. "We can learn more from dealing with 30-Year-War-like conflicts for today than from classic interstate wars," he explained. Strategic considerations for the European project could also be derived from this. For example, Europe needs independent technologies, including the production capacities necessary to defend itself in cyber wars, a task that a single nation state cannot afford: "The idea of Europe imposes on politicians and voters alike to think on a large scale and in the long term and to act rationally," Münkler made clear.

Walburga Countess Douglas, who had organised the "Pan-European Picnic" on the Hungarian-Austrian border together with her father in 1989, recalled the great attraction that the European idea was able to develop 30 years ago with the fall of the Iron Curtain: "Everyone could see that the unifying Western Europe was an economic and liberal story of success," she explained. She demanded this more strongly for the present: "The EU must remain an attractive force. We should keep in mind not to move borders, but to dissolve them". To achieve this, we must retell the ABC of Europe, especially in times of increasing nationalism: "And we must start from A again," said Countess Douglas.

In his lecture, Konrad Adenauer, lawyer, politician and grandson of the first German Chancellor, used Franco-German relations as an example to illustrate how European rapprochement can succeed: "The Élysée Treaty of 1963 is a model for understanding between peoples who have long been enemies," he said. He explained that the basis for this had been shared humanist foundations and values between Chancellor Adenauer and French President de Gaulle. But a successful history of rapprochement also included the fact that "the first impulses for Germany's reintegration into the Western community of values" had come from France.

The symposium was introduced by Dr Harald Langenfeld, Chairman of Sparkasse Leipzig and the Media Foundation of Sparkasse Leipzig. He made it clear that Europe is more than a financial and economic policy community of convenience: "Europe is a common area of trust. And in this sense, it is a community of values that does not close itself off, but makes an offer for democracy and freedom of opinion, for diversity and peaceful coexistence as an open society. The fact that history does not repeat itself is a banal insight: "But we must ask ourselves: Do mistakes and patterns of behaviour repeat themselves? Torsten Bonew, First Mayor and Deputy Mayor for Finance of the City of Leipzig, reminded the audience of the current challenges for politics and society: "In domestic politics, for example, the basic consensus on the value of democracy seems less self-evident today than it did a few years ago; in foreign politics, proven alliances are called into question. Accordingly, he thanked the Sparkasse Leipzig Foundations for "offering room for the necessary discussion and reflection".

This room was used with great commitment by around 200 guests from politics, business, society and the media: "I am enthusiastic and grateful for the lively and forward-looking discussion, not only at the end of the symposium, but throughout both days of the event," said Stephan Seeger, Director Foundations of Sparkasse Leipzig: "This gives me, but certainly also our guests, the confidence that the project of a common house for Europe has a future".

The Foundations of Sparkasse Leipzig had taken the anniversary of the end of World War I in 1918 as an opportunity for a two-day event on 19 and 20 October 2018, which focused on the discussion of the lessons and consequences of the wars of the past for a Europe of the future united in peace and freedom. Anne-Marie Descôtes, France's ambassador to Germany, and Michael Kretschmer, Prime Minister of the Free State of Saxony, had assumed joint patronage.

The event ends today, Saturday evening, with a festive concert at which the Leipzig Symphony Orchestra will perform Beethoven's 7th Symphony. With the 7th Symphony, the historical arc is drawn back to the Battle of the Nations, which took place 205 years ago in the Leipzig region. 2018 also marks the beginning of the 30-Year War. The event was organised jointly by the Sparkasse Leipzig's Media Foundation, the Cultural and Environmental Foundation and the Foundation for the Torgau-Oschatz Region.