Tomasz Piatek receives the Leipzig Prize for the Freedom and Future of the Media 2018. 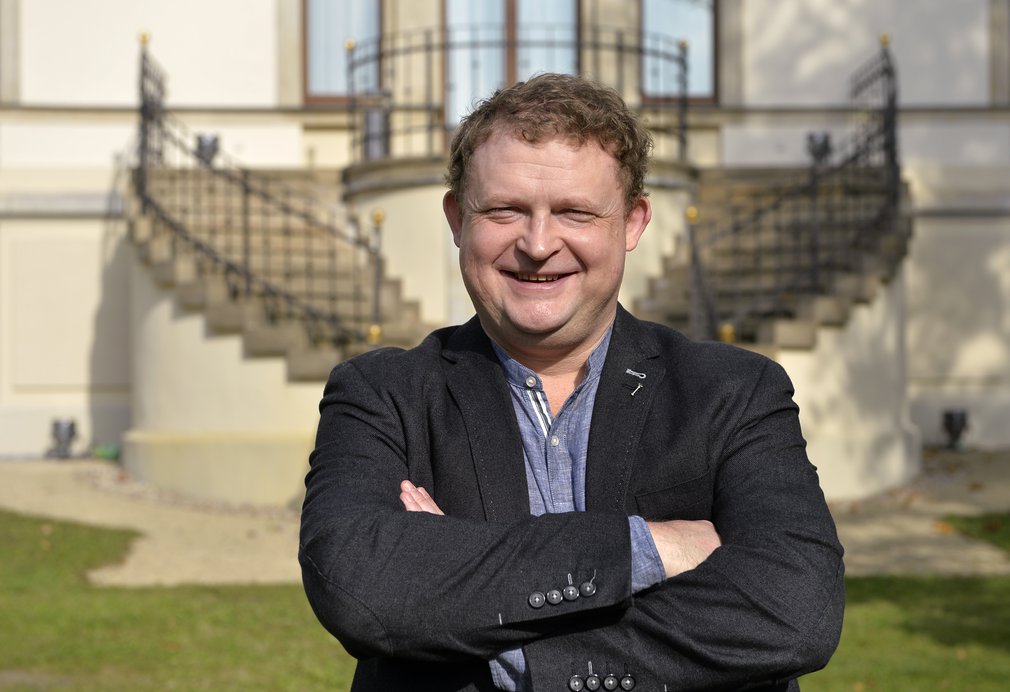 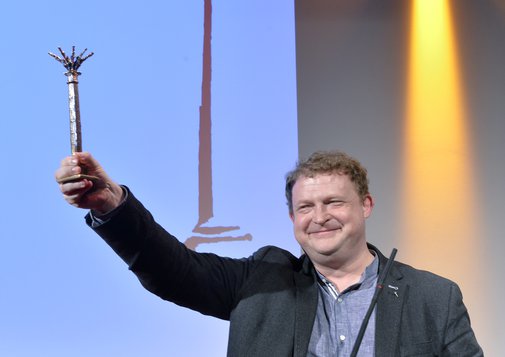 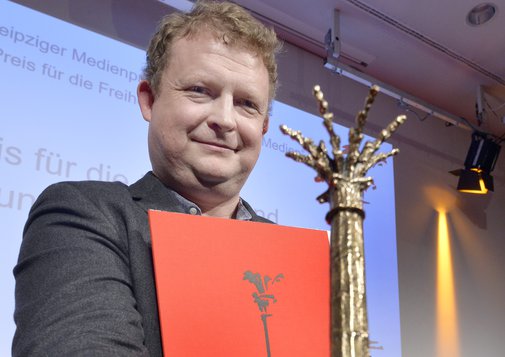 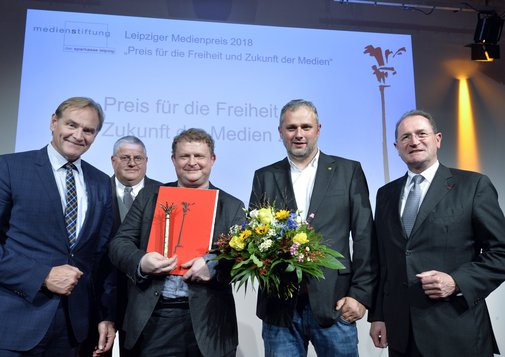 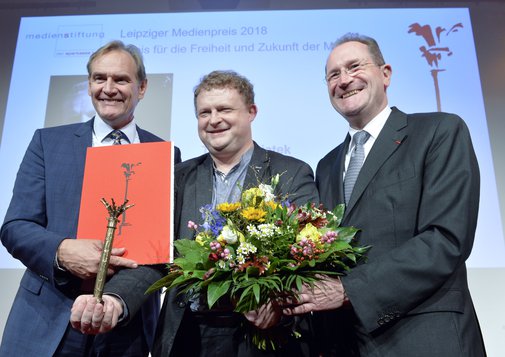 Dr Harald Langenfeld welcomed the guests of this year's award ceremony of the Prize for the Freedom and Future of the Media at Media Campus Villa Ida. 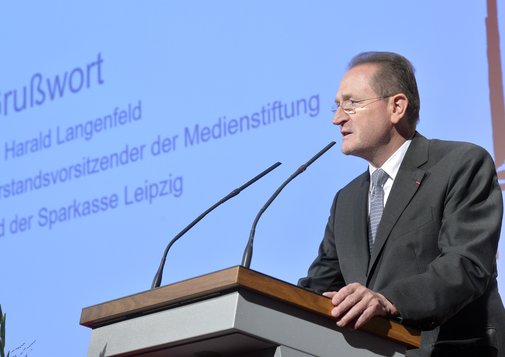 Lord Mayor Burkhard Jung also addressed words of greetings to the guests of the award ceremony. 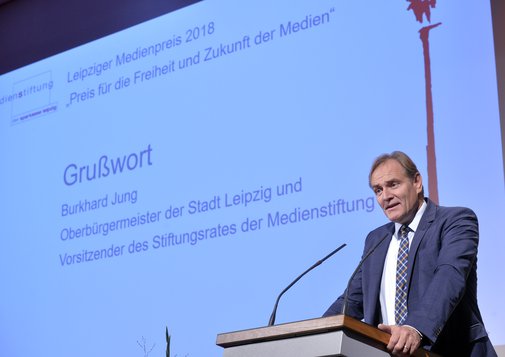 This year's Leipzig Speech to the Freedom of the Media and the Press was given by Bartosz T. Wielinski, a Polish compatriot and colleague of the laureate Tomasz Piatek. 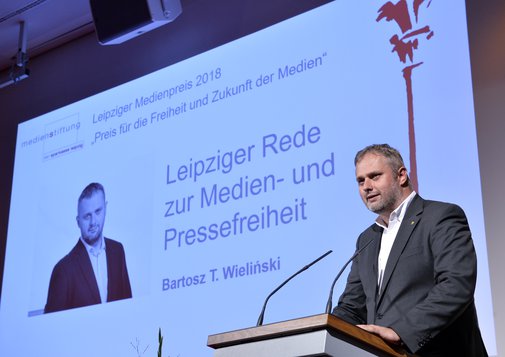 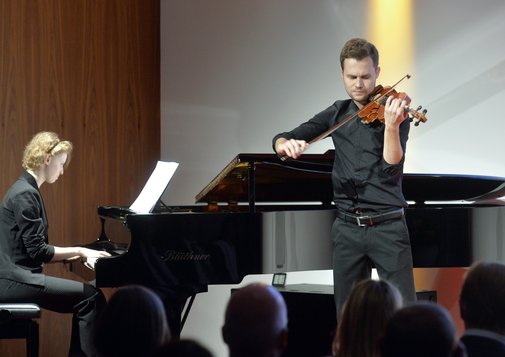 "We stand by the side of our friends in Poland"

Leipzig, 8 October 2018. On the evening of 8 October 2018, the Sparkasse Leipzig Media Foundation honoured Polish investigative journalist Tomasz Piątek with its 2018 Prize for the Freedom and Future of the Media. The prize is awarded every year by the Sparkasse Leipzig Media Foundation to media professionals who have demonstrated outstanding commitment to media freedom and independent reporting, often at risk to their own well-being. It is endowed with 30,000 euros. Tomasz Piątek accepted the award in person in Leipzig.

During the award ceremony, Dr Harald Langenfeld, chairman of the Media Foundation and Sparkasse Leipzig, referred to numerous attacks on the freedom of the press in numerous countries of the European Union in recent years: "Anti-media agitation, discrediting independent journalists, and disparaging their work seem to be considered socially acceptable in many places in Europe as well," Langenfeld explained: "It is therefore important that we - including with our Media Award - unambiguously point out threatening developments early on, and thus make them public." The award for Tomasz Piątek is also a gesture of solidarity: "We stand by our friends in Poland who stand up for the right to unrestricted access to information, for the freedom and independence of the press."

"In more than 20 years of journalistic work, Tomasz Piątek has earned a reputation as a critical observer and companion of social change in his home country," said Stephan Seeger, Managing Director of the Media Foundation and Director of the Sparkasse Leipzig Foundations, explaining the choice of the award winner: "Despite the increasingly difficult conditions for journalists in Poland, Tomasz Piątek does not allow himself to be intimidated by threats in his investigative work."

Prize winner Tomasz Piątek expressed his gratitude for the award: "I will use the endowment to support independent journalism - not only my own and not only that in Poland," he explained. In addition, he announced in his acceptance speech further publications on the entanglements of Polish government members with Russian politics. He called on European politicians not to court those politicians "who come to power through lies and who then use that power to suppress the truth".

Bartosz T. Wieliński, head of the foreign policy department of the daily Gazeta Wyborcza, also pointed out the difficult situation of Polish journalists in this year's Leipzig Speech on Media and Press Freedom during the award ceremony: "Poland is a battlefield where the national-conservative government of the Law and Justice party (PiS) is fighting against open society, against the rule of law and last but not least against independent journalists," says Wieliński. This development is not yet complete, as draft laws for the "re-polonisation" of private media show, he added. He called on the European Union to provide greater protection for independent journalists: "The EU has the means not only to exhort member states to guarantee unrestricted freedom of the press, but also to force them to do so".

In more than 20 years of journalistic work, Tomasz Piątek has gained a reputation as a critical observer of social change in his home country. Born in 1974, he studied linguistics in Milan. Between 1995 and 2013 he worked as a journalist for the Polish news magazine Polityka, the Italian daily La Stampa and as an expert in psycholinguistics. Since 2013 Piątek has been a columnist for the daily newspaper Gazeta Wyborcza. He is also known as the author of several novels, crime novels and fantasy books.

With his non-fiction book Macierewicz i jego tajemnice (Macierewicz and his secrets, 2017) at the latest, he was targeted by Poland’s state bodies: Piątek described here the links of then Polish Defence Minister Antoni Macierewicz to associates of Russian President Vladimir Putin, to the Russian secret service and to criminal groups in Russia - a noteworthy detail, since Macierewicz always presents himself in the Polish public as a decisive opponent of Putin. At the same time, Piątek accused the minister of being involved in illegal arms and money transactions. Instead of pressing charges against the journalist, the minister reacted by calling in the public prosecutor. Piątek was threatened with several years in prison. This action has since been dropped, but the journalist still regularly faces new attacks, especially from non-governmental sources.

About the Leipzig Prize for the Freedom and Future of the Media:

Since 2001, the Sparkasse Leipzig Media Foundation has been awarding the Prize for the Freedom and Future of the Media annually to journalists, publishers and institutions who have shown a high level of personal commitment to the freedom and future of the media. The prize is also intended to keep alive the memory of the Peaceful Revolution in Leipzig on 9 October 1989, during which demonstrators demanded "free press for a free country".