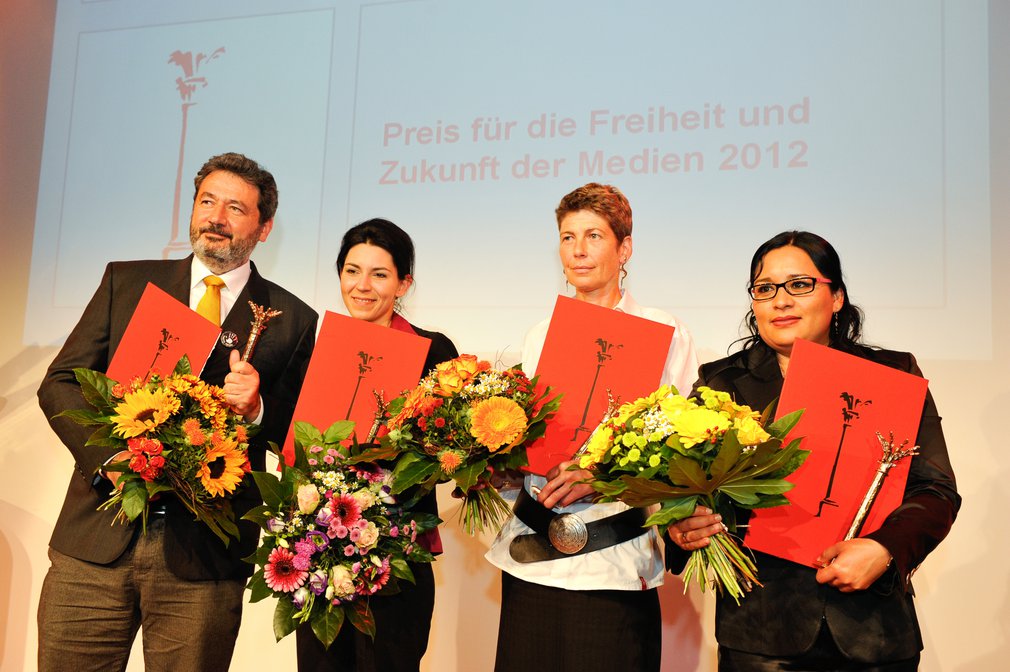 Prize for the Freedom and Future of the Media 2012

Leipzig, 8 Oktober, 2012. For the twelfth time, the Media Foundation of Sparkasse Leipzig today awards the "Prize for the Freedom and Future of the Media" to courageous journalists who stand up for the freedom of press around the world with an unusual commitment. This year’s laureates are Mexican journalist Ana Lilia Pérez, the Hungarian TV reporters Balázs Nagy Navarro and Aranka Szávuly as well as freelance journalist Bettina Rühl from Germany.

During the press conference this morning, Burkhard Jung, chairman of the Foundation Council of Media Foundation and Lord Mayor of Leipzig, emphasized the importance of freedom of press and expression. "Over many years, Leipzig has become a place which gives a voice to the 'free word' in a special way. In today’s world it is important to make clear again and again that the freedom of media is the basis for the freedom of the individual", Jung drew a connection to 9 October, 1989. At that time, protesters demanded a "free press for a free country."

Dr. Harald Langenfeld, CEO of the Media Foundation and of Sparkasse Leipzig, honoured the courage of the laureates and highlighted the role of the prize for their work: "We create attention and publicity to show that these journalists are restricted and threatened in their work."

Since 2003, Mexican reporter Ana Lilia Pérez publishes among others in major Mexican Newspapers such as La Jornada or Milenio. From the jury's decision: "According to the assessment of her colleagues Ana Lilia Pérez has made pioneering investigative work in Mexico. She uncovered corruptive relations between the oil monopolist Pemex and the government. Because of that she is taking a significant personal risk; especially in Mexico, where the life of a journalist is not worth much in many situations."

Until recently, the Hungarian journalists Balázs Nagy Navarro and Aranka Szávuly were editors of the public Hungarian television "MTV". In protest against the manipulation of TV news by their TV station in favour of the ruling FIDESZ party they organised a three-week hunger strike. Shortly afterwards they were sacked. From the jury's decision: "Balázs Nagy Navarro and Aranka Szávuly have committed themselves for a clean journalism. They not only uncovered injustice; they also experienced it afterwards. But they continue to fight. The fact that they had to go on hunger strike in order to protest shows, how few options are left for criticism in Hungary."

Since 1988, Bettina Rühl is a journalist and feature author with a focus on migration and civil war in Africa for ARD broadcasting. She reported from Algerian civil war and from the world’s largest refugee camp Dadaab in Kenya. In 2011 and under particularly difficult conditions, Bettina Rühl reported about the situation in Mogadishu, the war-ravaged capital of Somalia. From the jury's decision: "The themes that are tackled by Bettina Rühl are researched and produced with considerable effort and under personal risks. Many issues have a high social, economic and political relevance and bear an enlightened character."

Since 2001, the Media Foundation of Sparkasse Leipzig annually honours journalists, publishers and institutions that are committed to the cause of protecting and expanding freedom of the media with its "Prize for the Freedom and Future of the Media". The prize has a total purse of 30.000 Euros and is a commemoration of the "Peaceful Revolution" in Leipzig in the fall of 1989.