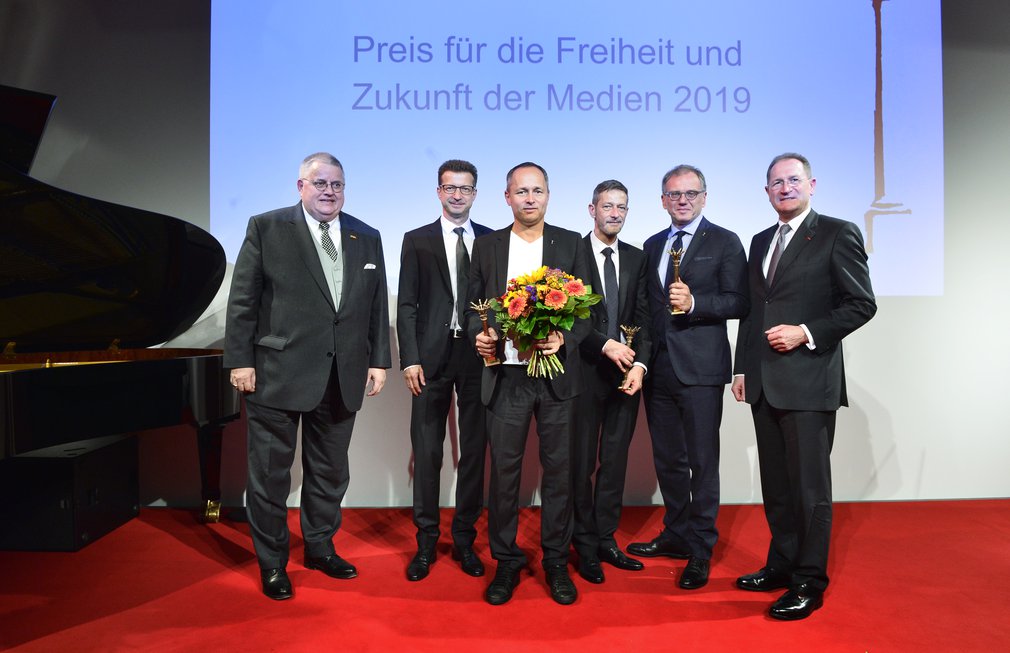 Prize for the Freedom and Future of the Media 2019: The laureates Arndt Ginzel, Armin Wolf and Gerald Gerber in front of Villa Ida, the seat of the Foundations of Sparkasse Leipzig. 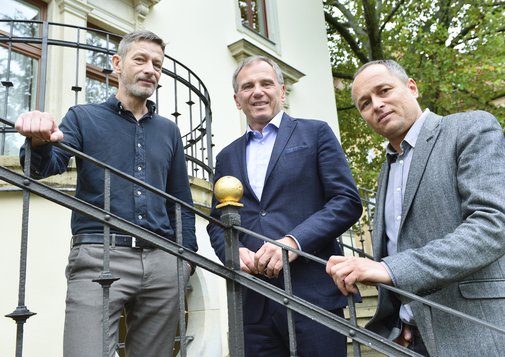 The laureates Armin Wolf, Arndt Ginzel and Gerald Gerber as well as Dr Harald Langenfeld during the press conference on the occasion of the award ceremony at Media Campus Villa Ida. 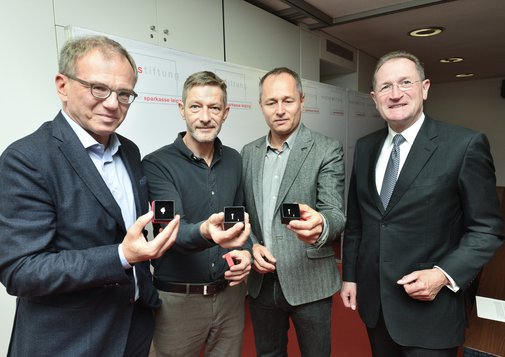 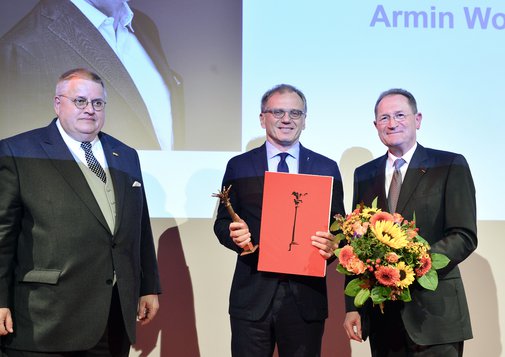 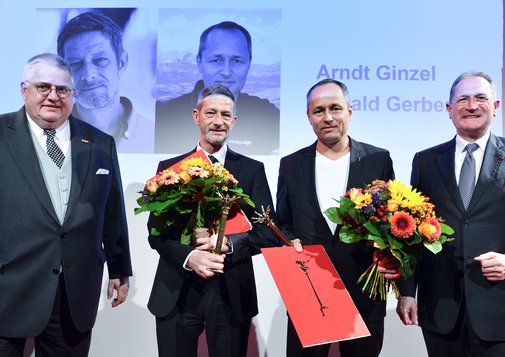 Austrian TV presenter Armin Wolf as well as German journalists Arndt Ginzel and Gerald Gerber have been awarded the Leipzig Prize for the Freedom and Future of Media 2019.

Leipzig, 8 October 2019. On the evening of 8 October 2019, the Prize for Freedom and Future of the Media 2019 of the Sparkasse Leipzig Media Foundation was awarded to the Austrian TV presenter Armin Wolf and the two German journalists Arndt Ginzel and Gerald Gerber as a team. The award recognizes media professionals who have shown great commitment against restrictions on freedom of the press and independent reporting often by accepting personal risks. The prize is endowed with a total of 30,000 euros.

Dr Harald Langenfeld, Chairman of the Board of Media Foundation and Sparkasse Leipzig, praised the award winners Armin Wolf, Arndt Ginzel and Gerald Gerber as "intrepid and persistent". They posed "the critical questions that are not met with approval by all the discussion partners," said Dr Langenfeld. "It is no coincidence that the call for freedom of speech and writing was heard at the birth of all democratic movements in human history. This freedom is not a matter of course, it must be fought for, protected and defended. Our Media Prize wants to make its contribution to this," explained Dr Harald Langenfeld. Stephan Seeger, Managing Director of Media Foundation and Director of Foundations of Sparkasse Leipzig, added: "The 20 years of work of our Media Foundation has taught us: Wherever freedom of the media is endangered; journalists, publicists or editors can be found to defend it. We want to support them". This could also be seen as a sign of hope that Leipzig is sending out to the world by awarding the prize.

The prizewinners accepted their prizes in Leipzig at a festive event at Media Campus Villa Ida. Armin Wolf thanked the jury for the awarding of the prize, which surprised him: "In Austria we are far away from conditions like in Turkey, Russia or Hungary, where real journalistic work has become almost impossible. But Western democracies are also increasingly trying to delegitimize the work of independent media," Wolf explained during a press conference at the award ceremony. "This is the most blatant threat to us. For a democratic discourse, a common factual basis would be needed: "This basic consensus is increasingly being questioned, and this really worries me. In order to preserve the freedom of the media, it is necessary "for us journalists to make our work even more careful, to explain our work much better and also to discuss criticism of us time and again with the public, even if this is laborious and time-consuming".

In his acceptance speech during the award ceremony, the German investigative journalist Arndt Ginzel reflected on the events following the publication of the so-called "Hutbürger" video of an anti-Merkel demonstration in Dresden in the summer of 2018: "The call 'Lügenpresse' ('lying press') is effective," he said: "Every day our journalistic colleagues, camera men and women, and photographers get to feel it. They are insulted, verbally and physically attacked. It is nothing new that right-wing extremists are rushing journalists. The new quality lies in the fact that even in bourgeois milieus in East Germany it is gradually regarded as "chic" to react with contempt and hatred towards reports that contradict their opinions or world views." He called for a "practical further development" of press freedom in Germany as well - including the adoption of a Freedom of Information Act in the Free State of Saxony by the coming government coalition.

Camera operator Gerald Gerber was delighted by beeing awarded the prize: "Today is a great day in my professional life. I accept the award on behalf of all the people behind the camera who are not regularly the focus of attention, but who have to live with their work being impaired almost every day".

About the prize winners

Armin Wolf was born in 1966 in Innsbruck, Austria. Since 2010 he has been the Deputy Editor-in-Chief of the news channel of Austrian television channel ORF and since 2002 he has been the presenter of the ORF news programme "Zeit im bild" (ZIB2). He started his career with ORF as a school leaver, working freelance for the regional studio in the Tirol. Since then he has worked as Political Editor in radio and TV, USA correspondent (1991-92), Editorial Director and presenter. Wolf regularly gives lectures and has published several books - the latest in 2013. It's titled "Why do we still need journalists?" In 2019, Wolf began to be talked about all over Europe following his TV interview with Harald Vilimsky, General Secretary of the right-wing FPÖ party. Vilimsky countered Wolf's critical questions about a poster displayed by the Styrian youth wing of the FPÖ that this "would have consequences" for the presenter. Even before that, Wolf had several times been a target for the FPÖ. Amongst other things he was accused of insubordination in his questioning and spreading "lies". In 2018 he did a highly respected interview in Moscow with Vladimir Putin. Wolf has been awarded many prizes for his work, amongst others as "Austrian journalist of the year 2004, 2018). In Germany he has received a special award of the Hanns Joachim Friedrich Prize (2016) and the Netzwerk Recherche Lighthouse Prize (2017) and a "Special Honour" Award of the Grimme Prize (2018).

Arndt Ginzel (born in Spremberg in 1972) is a German investigative journalist who studied at the University of Leipzig and today works regularly for German TV magazine shows, including ZDF's "Zoom", "The Story in the East" (ARD), "Exact" and "Fact" on MDR /ARD or ZDF's "Frontal21". He became well known for his research into the so-called "Saxon Swamp" corruption scandal, which he reported in Spiegel and Zeit Online. He was taken to court for this case with a complaint of defamation and slander. He lost the case in the original court but at the second instance he was cleared. In 2015 he was imprisoned by pro-Russian rebels whilst researching in East Ukraine. He won the Bavarian TV Prize for the reportage "Shadow play - Putin's undeclared war against the West", which he made together with Markus Weller and he won a nomination for Best Documentary at the German TV Awards 2017 for his reportage "Putin's secret network - how Russia is splitting the West".

Gerald Gerber (born in Meissen in 1972) has been working in film and TV production in Dresden and Leipzig since 1997 and works as a freelance camera operator, mainly for German TV productions and programmes such as "Tagesschau" (ARD), "Frontal21" (ZDF), "Galileo" (Pro7) and "MDR um 2" (MDR). He was a founder member of Meissen TV in 1996 and a member of its Executive Board until 2002. Gerber worked as a camera operator on many foreign assignments for ARD and ZDF in the East Ukraine conflict. In November 2016 he was arrested by Syrian security forces whilst filming on the Turkish-Syrian border.

Arndt Ginzel and Gerald Gerber were subjected to lengthy police checks during the course of a Pegida demonstration in Dresden. It was provoked by a demonstrator who apparently did not want his face to be photographed and it hampered their reporting work for some considerable time. This led to wide-ranging discussions about press freedom and the role of the police in that conflicted zone that lies between security measures, protecting the freedom of assembly for demonstrators and making sure that journalists can do their jobs unhindered. The Dresden Police President Horst Kretzschmar later apologised for the action taken against the journalists. "I would like to confirm unmistakably that we, the police, have a responsibility to ensure that press freedom is assured in our state. As police chief I regret this incident, which was not in order, and I have ensured that we will reappraise it so that we can learn from it," said Kretzschmar.