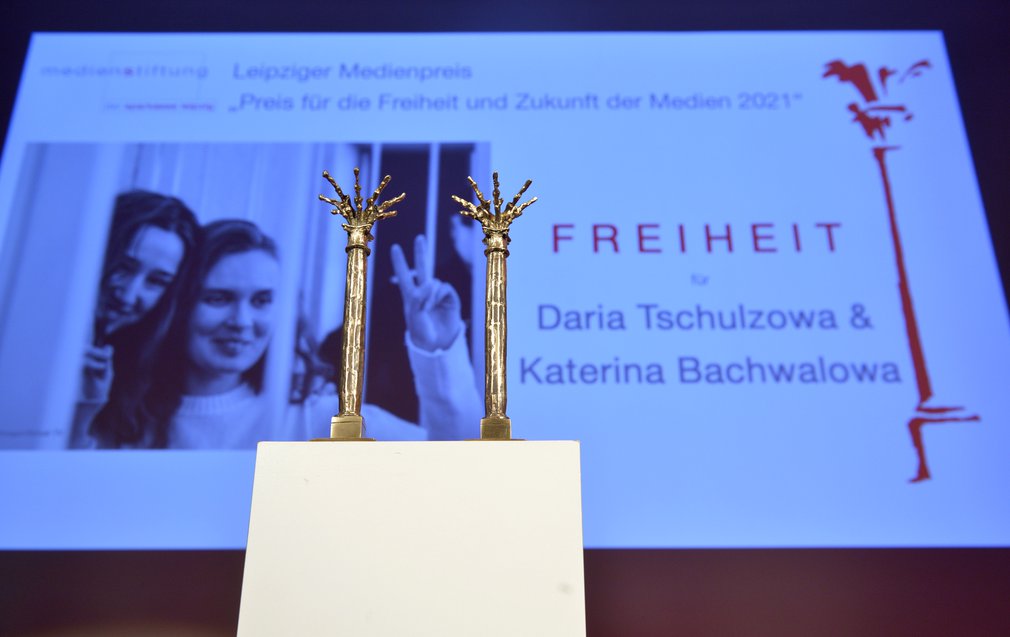 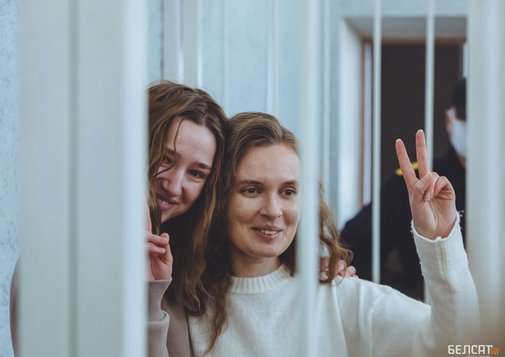 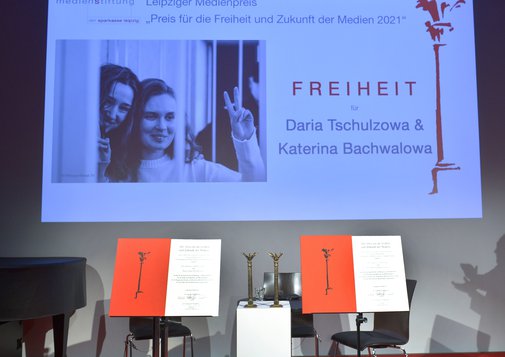 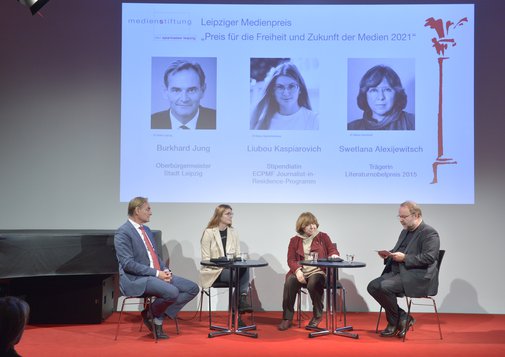 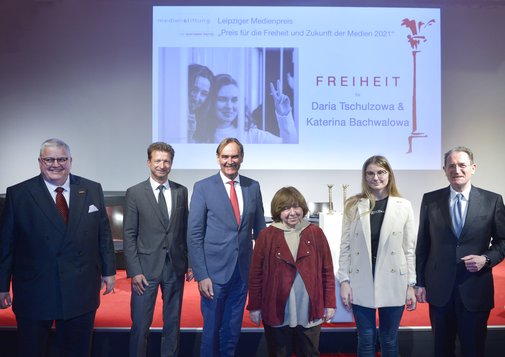 Nobel Prize laureate Alexievich: "The people of the young generation in Belarus are no longer slaves."

Imprisoned Belarusian journalists Katsyaryna Bahvalava and Darya Chultsova honoured with the Prize for the Freedom and Future of the Media.

Leipzig, 8 October 2021. During a festive ceremony on Friday evening, the two Belarusian journalists Katsyaryna Bahvalava and Darya Chultsova have been awarded the Prize for the Freedom and Future of the Media of Media Foundation of Sparkasse Leipzig. The laureats will each receive 10,000 euros as prize money.

"The fact that our laureates are still in custody in Belarus is a fact that not only makes us sad. It upsets us and it makes us angry," explained Dr Harald Langenfeld, Head of Executive Board of Media Foundation and Sparkasse Leipzig, during the award ceremony. The case of the young journalists is just one of many examples of how freedom of the press and the media are dealt with in Belarus: "Not only free speech is literally trampled underfoot - it is the numerous journalists themselves who are exposed to reprisals, who experience violence, who are robbed of their work and their words." He called for immediate release of Bahvalava and Chultsova.

During the award ceremony, Burkhard Jung, Lord Mayor of the city of Leipzig and Chairman of the Foundation Board of Media Foundation, the Belarusian journalist Liubou Kaspiarovich and the Belarusian laureate of the Nobel Prize for Literature, Svetlana Alexandrovna Alexievich discussed the current situation in Belarus. Horrible things are happening in Belarus, Alexievich explained and drew parallels to Umberto Eco's descriptions of fascist states in view of nightly arrests, banned media and closed non-governmental organizations. In view of the current situation in her home country, she still counts on the support of democratic countries: "We not only have to defeat Lukashenko, but Putin too - that makes the task particularly difficult." Nevertheless, she remains hopeful: "The people of the young generation in Belarus are no longer slaves."

Journalist Liubou Kaspiarovich of the independent Belarusian news platform TUT.by, who was recently imprisoned by the regime and is currently supported as Journalist-in-residence by the European Centre for Press and Media Freedom (ECPMF), said: "The truth is now considered something extremist in Belarus. The only way to be honest with your readers is to emigrate and report from abroad." The elite in Belarus is currently taking revenge on the independent media, editors-in-chief are being held hostage: "Information is the greatest threat to power," said Kaspiarovich. Burkhard Jung called on the people in Belarus to remain hopeful. Sometimes changes would take time, but he still believes that "things can be changed".

Award ceremony and panel discussion were broadcasted live on the Internet on Friday, 8 October from 6 pm on.

The 27-year-old TV reporter Katsyaryna Bahvalava (pseudonym: Katsyaryna Andreeva) and her 24-year-old camerawoman Darya Chultsova work for BelSat TV, which is operated from Poland. According to media experts, BelSat TV is one of the few opportunities for people in Belarus to get information regardless of regime. In this way, the sender fills an "information vacuum". On November 15, 2020, Bahvalava and Chultsova broadcasted a memorial meeting for Roman Bondarenko, who had been killed a few days earlier. Bondarenko was arrested on November 11, 2020 and shortly afterwards he was seriously injured and transferred to a hospital by the district internal affairs department, where he died on November 12. Bahvalava and Chultsova had broadcasted a live stream of the Bondarenko memorial meeting for more than five hours. Shortly afterwards they were arrested. A Belarusian court later assessed the broadcast as an “act that grossly violated public order”. Bahvalava and Chultsova were sentenced to two years in prison. The appeal against the judgement was dismissed at the end of April, 2021.

Katsyaryna Bahvalava was born on November 2, 1993 in Minsk. She had studied at the Minsk State Linguistic University and then moved to Spain for two years. After her return to Belarus, she worked as a journalist for the Belarus Radio Liberty and the newspaper Narodnaya Volya. She has been with BelSat TV since 2017 and was arrested several times in the course of her work. Darya Chultsova was born on February 20, 1997 in Shklou. She had studied at the State Kuleshov University Mahiljou. While studying she worked for the website Mahiljou Online. After completing her studies in 2019, she joined BelSat TV first as a freelancer, later as a permanent employee.

With its Prize for the Freedom and Future of the Media, Media Foundation of Sparkasse Leipzig has been honouring journalists, publishers and institutions who are committed to the freedom and future of the media with a high level of personal commitment. The award is also intended to keep alive the memory of the “Peaceful Revolution” in Leipzig in 1989: At that time, the demonstrators demanded “a free press for a free country”.