From left to right: Leipzig's Lord Mayor Burkhard Jung, laureate Dušan Miljuš, laureate Ahmet Altan and Dr Harald Langenfeld (Chairman of the Board of Media Foundation and of Sparkasse Leipzig). 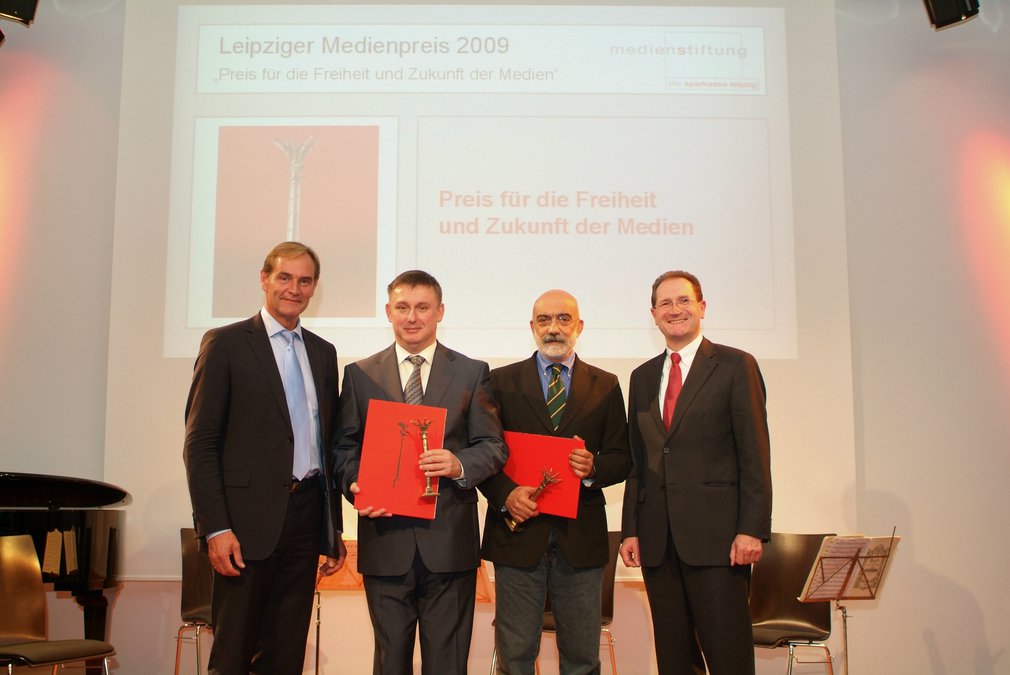 Laureate Ahmet Altan receives his award from the hands of Burkhard Jung and Dr Harald Langenfeld. 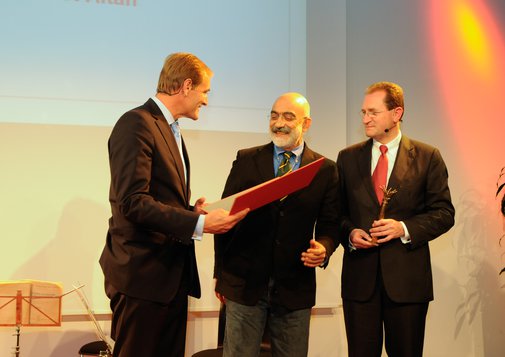 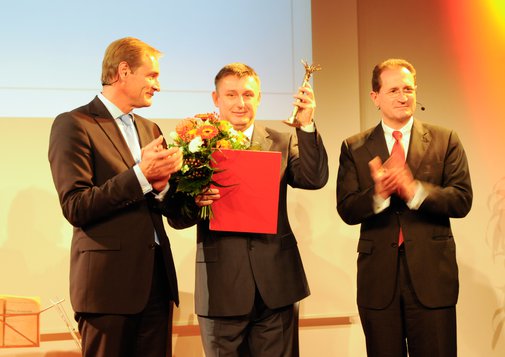 Laureate Roberto Saviano was not able to receive his award personally. Instead he sent a video message to the guests of the award ceremony. 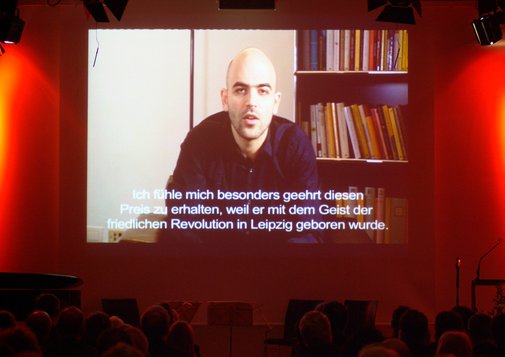 Leipzig, 4 September, 2009. This year’s "Prize for the Freedom and Future of the Media", donated by the Media Foundation of Sparkasse Leipzig and including a total prize money of 30.000 Euros, goes - ex aequo - to Roberto Saviano, Dušan Miljuš and Ahmet Altan.

Roberto Saviano, who was born in a small town near Naples, the stronghold of the Camorra, has focussed - for years on end - both his work as a journalist and as a writer on this criminal organisation. In 2006, he published the faction book Gomorrha, which has also been adapted for screen. In it, he in detail portrays Mafia’s underhand methods, its economic and political entanglement, and, moreover, speaks out about culprits and rackets. One certain Camorra clan put a death sentence on him and threatened to kill him several times. Thanks to writer Umberto Eco and the Nobel Committee who interfered on his behalf, Saviano is now under constant police protection, but has to change hideouts every other day.

Constant police protection - this is a feature of Dušan Miljuš’ life as well. In 2008, the editor in chief of the Croatian daily Jutarnji list was beaten up by strangers with baseball bats outside his house. The assailants broke his arm, he also suffered from concussion. Even before this attack, he got hate mail; a competing newspaper even published his obituary. What caused threats and the attack can only be assumed: newspaper articles about arms smuggling between the European Union and the states of former Yugoslavia and about the dealings of the Mafia in the municipal building trade in Croatian cities. In his articles, Dušan Miljuš has also named the culprits. In Croatia, he has become a symbol of brave journalism. Jutarnji list has been publishing a photo of its editor in chief ever since, demanding that the crime must be cleared up completely.

"You have to be crazy if you want to do something like this", Ahmet Altan says about his work. He is editor in chief of Taraf (Point of View), a Turkish newspaper founded in 2007 that caused quite a few sensations in Turkey with its revelations. Altan started his career as a journalist and columnist for renowned newspapers such as Hürriyet or Milliyet, but repeatedly came into conflict with the Turkish state. He was sacked by Milliyet due to some journalistic work in which he fictionally laid out a picture of Kurdey, a state populated by a majority of Curds. He was banned and wrote novels. It was only with Taraf that he was able to return to his work as a journalist. In September 2008, he wrote an article about the genocide of Armenians and got prosecuted for dividing the Turkish nation. Regardless, Taraf continued making enemies within the Turkish government and the military, with an article, for instance, that focussed on a PKK attack which resulted in the death of 17 soldiers of the Turkish army. Taraf claimed, the Turkish army knew about this attack beforehand but did not introduce any measures against it. Taraf doesn’t get any advertisements, is sued regularly by the authorities and, therefore, suffers from serious economic problems. Foreign correspondents in Turkey consider Taraf as being idealistic and uncompromising. Despite the problems and threats it faces, Taraf with its editor in chief will soldier on.

The prize will be awarded for the ninth time. As in 2008, the award ceremony will take place on 8 October, the eve of the anniversary of the peaceful revolution in the former GDR, which is connected to the decisive mass demonstration in Leipzig on 9 October, 1989. With this reminiscence to the Peaceful Revolution of 1989, the Media Foundation wishes to highlight the moral connection between the prize and the Peaceful Revolution, because the wish to be granted the freedom of media and the press had been one of the main objectives of the 1989 demonstrators.

Moreover, this connection is symbolized by a miniature replica of the commemorative column on Leipzig’s Nikolaikirchhof, the Prize winners will be awarded with. The Peaceful Revolution of 1989 started with prayers for peace at St. Nicholas Church in the city centre of Leipzig. The "Prize for the Freedom and Future of the Media" goes to journalists, publishers and media institutions who - by way of their daring, courage and commitment - strengthen the freedom of the media and the press.

From a list of proposals handed in by national and international experts of all media, laureates have been selected by the Foundation Council of the Media Foundation of the Sparkasse Leipzig composed of editors in chief, TV reporters and writers.

Proposals for the "Prize for the Freedom and Future of the Media" 2010 should be forwarded until 28 February, 2010.