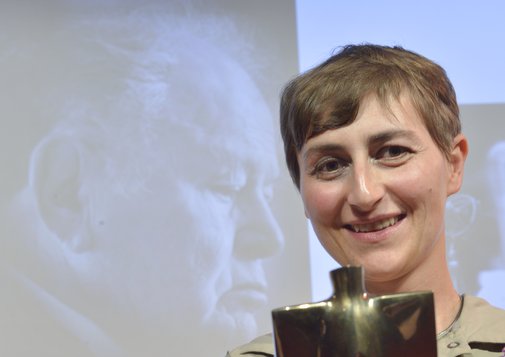 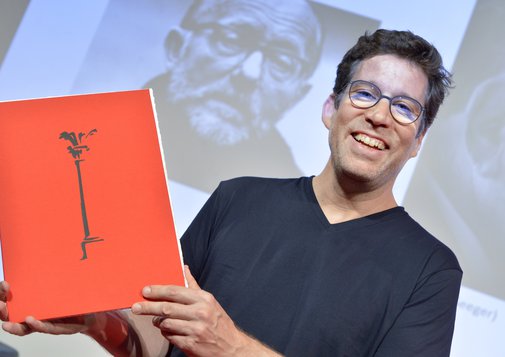 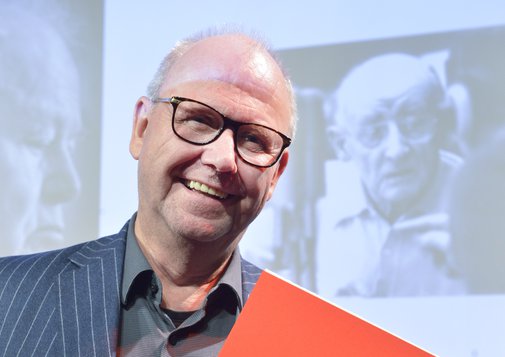 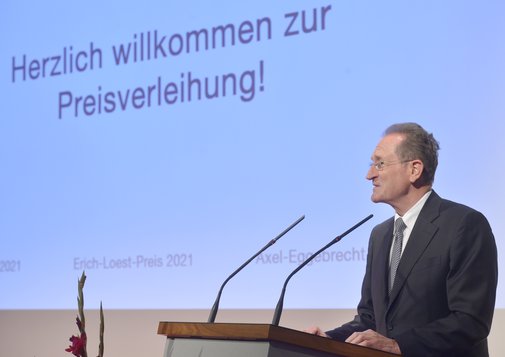 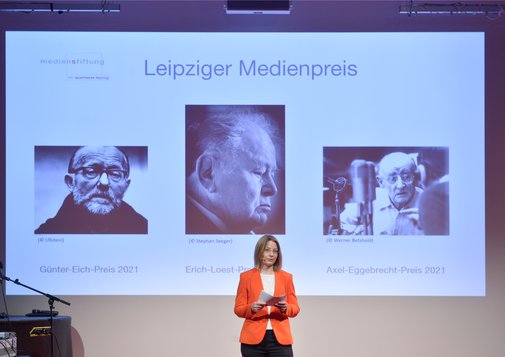 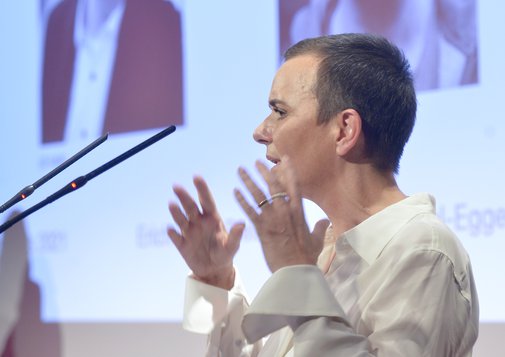 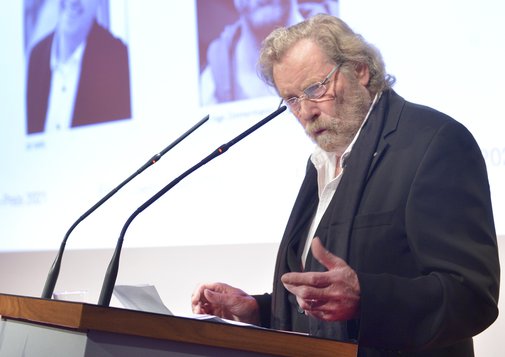 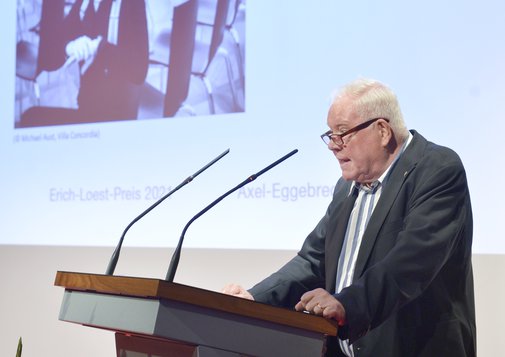 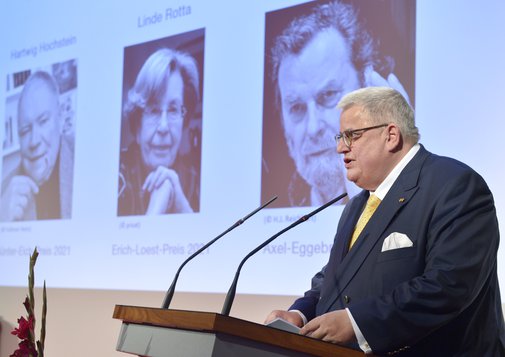 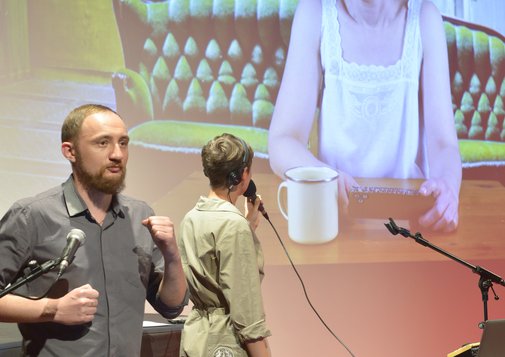 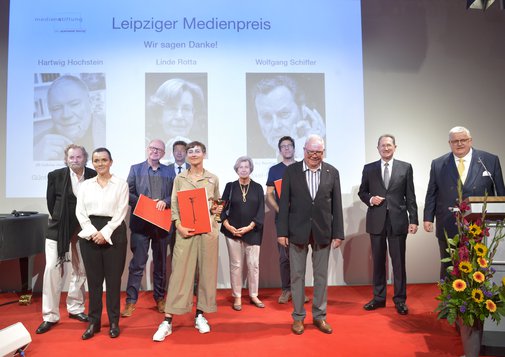 "Award for a lifetime achievement! What a joy!"

Today, 9 September 2021, Erich Loest Prize, Axel Eggebrecht Prize and Günter Eich Prize of Media Foundation of Sparkasse Leipzig were awarded at Media Campus Villa Ida. This year's laureate of Erich Loest Prize is German author Ulrike Almut Sandig. Dr Walter Filz was honoured with the Axel Eggebrecht Prize 2021 for his contribution to the German radio feature genre, while Paul Plamper received the Günter Eich Prize 2021 for his commitment to German radio play genre. All three prizes are endowed with 10,000 euros each and are awarded every two years. As an exception, the three prizes were awarded in a joint festive event in 2021.

"A huge joy! My novel 'Monster wie wir' is set in a Central German lignite area that deliberately has similarities with the countryside south of Leipzig as well as the Lusatian lignite region. The structural violence in the domestic and political sphere, of which my protagonist tells, happened and happens everywhere. But we should first put our own house in order. For me this is an act of love and respect for our own origins," Ulrike Almut Sandig happily said.

"With our Günter Eich Prize for German radio play and our Axel Eggebrecht Prize for German radio feature, we are honouring authors who have steadily expanded the repertoire of these two 'radio genres' with their work - and this also applies to this year's laureates Paul Plamper and Dr Walter Filz," Dr Langenfeld continued. Both laureates thanked the juries and Media Foundation for the awards they received. Axel Eggebrecht Prize winner Dr Walter Filz stated: "Award for a lifetime achievement! What a joy! In the past I often heard: 'You've got a bang'. Now the jury says 'Explosion in the acoustic'. Sounds much better. And the sound is what really counts when it comes to the radio feature ."

As part of the award ceremony, which was broadcast via live stream, the two jury chairmen of Erich Loest Prize and Günter Eich Prize as well as a long-standing member of all three prize juries were bid farewell. Hartwig Hochstein, former editor-in-chief of the Leipziger Volkszeitung newspaper and member of the Foundation Board of Media Foundation, has been chairman of the jury since the Erich Loest Prize was first awarded in 2017. His successor is Andreas Platthaus, head of the literature and literary life section of the Frankfurter Allgemeine Zeitung newspaper.

Wolfgang Schiffer, long-time radio play director at WDR (West German Broadcasting) and jury chairman of the Günter Eich Prize since 2015, will be followed by Thomas Fritz, audio dramaturge at Sachsenradio and Mitteldeutscher Rundfunk (Central German Broadcasting) from 1991 to 2020. Linde Rotta has been a co-initiator of both radio prizes (from 2007) and the Erich Loest Prize (from 2017) represented in all juries since then. After fourteen jury meetings, Rotta will now withdraw from the two radio prize juries. She will continue to be a member of the jury of Erich Loest Prize. "By their commitment and dedication, Linde Rotta, Hartwig Hochstein and Wolfgang Schiffer have shaped our awards and thus also our Media Foundation for many years. Their commitment always went far beyond mere participation in a jury," said Stephan Seeger, Managing Director of Media Foundation.

Originally, the Erich Loest Prize was to be awarded on 24 February 2021, Erich Loest's 95th birthday. The awarding of the radio prizes was actually planned for late spring. However, the Corona crisis made both impossible. Thus, as an exception, all three prizes have now been awarded in a joint award ceremony: "We did not want to do it as a mere online event, because we believe that this would not do justice to any of our prizes or the laureates themselves." explained Stephan Seeger.