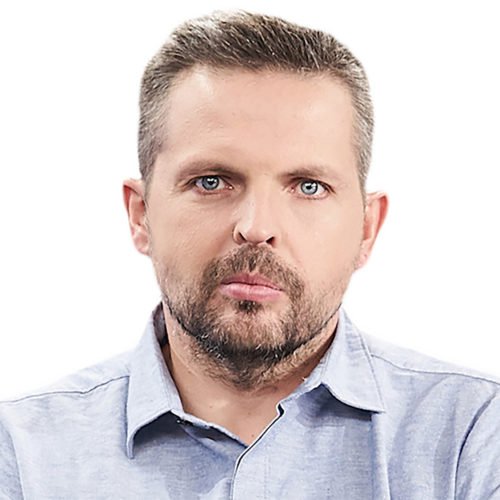 A "Beacon of independent journalism in and for Russia"

Investigative journalist Roman Badanin receives Prize for the Freedom and Future of the Media 2022.

Leipzig, 6 July 2022. This year, the Russian investigative journalist Roman Badanin is awarded the Prize for the Freedom and Future of the Media by Media Foundation of Sparkasse Leipzig. The award honours media professionals and institutions, who have committed themselves to freedom of the press and expression by their work and who, in doing so, also accept repression, often including attacks on life and limb. The Prize is endowed with 10,000 euros and will be awarded on 7 October 2022 at Media Campus Villa Ida, the seat of Media Foundation.

“Roman Badanin's professional career is an example of how independent critical journalism has been increasingly and deliberately silenced in Russia over the past three decades. Badanin was persecuted and threatened, just as our 2005 laureate, Anna Politkovskaya, was persecuted and threatened. Her murder in 2006 was followed by numerous other murders of journalists critical of the government. At the height of the repression directed against him, Roman Badanin was forced to leave Russia,” explains Stephan Seeger, Managing Director of Media Foundation.

"With this award, the jury is sending a clear signal that the free world is not willing to accept the liquidation of freedom of the press and freedom of expression by Putin's autocratic regime. Where there is no free press, the lie becomes the officially decreed truth, as can be seen from the reporting on the illegal attack on Ukraine by Putin's regime by the state-controlled Russian media. The few remaining critical voices in Russia enjoy our full solidarity,” Seeger continued.

The jury, comprised of the Board and members of the Foundation Council, praised Roman Badanin as a “beacon of independent journalism in and for Russia”. He experienced the change in state media policy in Russia first-hand like no other: born in Kurgan in 1970, he got to know the journalistic work in relative freedom from 1997 on at the independent newspaper Iswestija , after which Badanin worked in leading positions in Russian media such as Gazeta.ru as well as Western media in Russia such as Forbes.ru.

Between 2014 and 2017, he encountered the increasing restrictions on media freedom as editor-in-chief of the news agency RBK and the government-critical TV channel Dozhd. In 2018, Roman Badanin, who studied at Stanford University as a fellow of John S. Knight Journalism Fellowship programme from 2017, founded the investigative portal Proekt (Project), which reports, among other things, on the Russian paramilitary organization “Wagner” and on the economic activities and corruption of Russian political elites.

From 2019, Proekt was monitored by government agencies and in 2021 it was the first independent news portal to be included in the list of “undesirable organizations”. Putin's regime declared Badanin and other members of the editorial board “foreign agents”. Their homes were searched and heavy fines and imprisonment were threatened if Proekt continued. Badanin - just on a trip abroad - decided not to return to Russia. Proekt continued to be operated from abroad, while Roman Badanin founded the investigative platform Agentstvo (The Agency) in autumn 2021. Badanin currently works as a Senior JSK Fellow at Stanford University.